The Hunga Tonga-Hunga Ha’apai underwater volcano, located approximately 60 km north of Tongatapu – the main island of Tonga, erupted on 15 January. This led to a huge explosion underwater triggering a tsunami, which resulted in damage to buildings and infrastructure around Nuku’alofa, the capital of Tonga. Tsunami waves also affected several countries in the Pacific Ocean and were recorded at gauge points across the Atlantic coast of Morocco as well as the Western Mediterranean, including Toulon (southern France), Carloforte (Sardinia), Palermo (Sicily), and Marsaxlokk (Malta), with the amplitudes of less than 15cm. The activity of the volcano is still ongoing with huge amounts of ashfall recorded in Tonga, particularly in Tongatapu Island, and across the islands of Vatoa and Ono-i-Lau in Fiji.

This eruption is possibly the biggest we’ve seen for the last 30 years since the 1991 Mount Pinatubo blast in the Philippines. However, scientists estimate that the Hunga Tonga eruption is equivalent to about 2% of the pressure released in the Krakatoa eruption in 1883. The tsunami advisories and waves sent around the world were caused by the pressure wave and not seismic events or water displaced from portions of a volcano falling into the ocean.

While the eruption is unlikely to have a global impact on climate change, it could have a mild cooling effect in the southern hemisphere which could last until November 2022. Experts said that the volcano might go quiet after eruption, but the possibility of further explosions can’t be excluded.

In October 2019, Thomas and Balaji also reported on the Krakatau Volcano Eruption in Insurance Asia News. Read the full article below.

Early in the morning of August 26, 1883, in the Sunda Strait between the Indian Ocean and the Sea of Java, Krakatau Volcano erupted. The last and largest of four blasts was heard clearly 5,000 kilometres away. Pyroclastic flows moving at speeds of hundreds of kilometres per hour caused tsunami waves which rocked vessels as far away as South Africa. The port town Merak on the island of Java was destroyed by a wave of at least 30 metres. Tidal gauges in the English Channel recorded high waters caused by concussive air waves that had circled the globe. The sky worldwide darkened for years, as two thirds of the island of Krakatau, along with volcanic ash and poisonous gasses, shot into the atmosphere. The moon appeared blue-green.

Krakatau is not known to have been an insured loss in 1883. However, if a similar eruption were to occur today, it would undoubtedly lead to an enormous volume of claims worldwide, not least for marine and coastal property exposures. Some at least would arise from the impact of the tsunami waves, rather than from the eruption itself. This extraordinary low-frequency, high-severity peril is as yet unmodelled, a tail risk which is only very rarely considered by reinsurance underwriters. 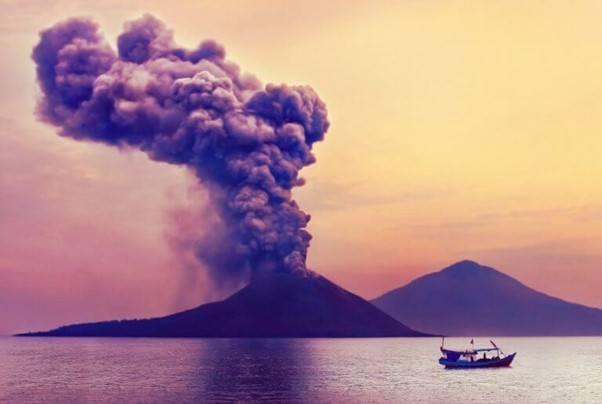 In 2012, the Geological Society of London published a paper which warned Anak Krakatau could again cause a tsunami, this time through the collapse of the material which had built up on its remains. It happened in December 2018. Although this time the event was much less dramatic, the wave did cause insured damage, and about 400 deaths. The cause of the cascade – the failure of volcano walls, known as a caldera collapse – is one of three principal causes of volcanic tsunamis, alongside underwater explosions and the collapse of lava benches. For example, a small tsunami hit Rakata Island in October 1981, during an awakening of Anak Krakatau. A 1930 eruption of Stromboli, a volcanic island north of Sicily, caused a deadly tsunami, showing that the risk is not limited to the Pacific.

Insured losses may arise under a variety of coverages. Property damage and business interruption in coastal locations are probably the greatest exposures. Tourism and aviation are likely to be disrupted, with associated impacts including accident claims. The marine market could also be seriously affected by claims. Air transport would also be severely disrupted due to volcanic ash clouds.

If an explosion similar to the 1883 eruption of Krakatau were to occur today in the Pacific Ring of Fire, the series of 452 volcanoes that roughly outlines the Pacific Ocean, the impact would be catastrophic, and could deliver a severe blow to the insurance market. Coastal exposures in Indonesia and other Asian countries have grown massively since the 20th century, and continue to do so as population density increases and coastal habitation extends. They have reached record-breaking levels. The vulnerable island of Java is now the most densely populated in the Indonesian archipelago, but the damage would extend much further. Many urban centres that border the Ring of Fire are vulnerable. A handful of these volcanoes are active and have genuine potential to cause a tsunami. 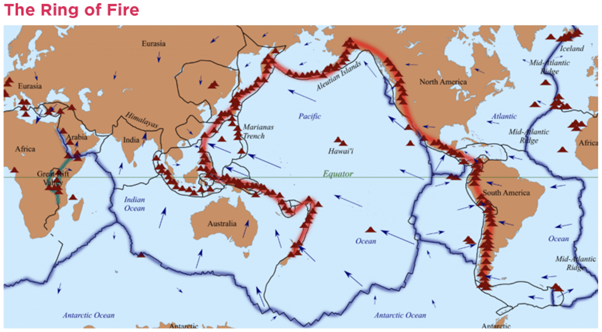 Losses arising from tsunamis are explicitly excluded from some standard insurance policies, but many others are silent about the risk, which presumes coverage is granted. For example, the model earthquake and Volcanic Eruption policy endorsements published by the US Insurance Services Office provide no coverage for damage caused directly or indirectly by tsunamis, even if they are attributable to a volcanic eruption, but flood-specific coverage is much more likely to include tsunami losses, which are covered under policies issued by the US National Flood Insurance Program. In contrast, the 2011 tsunami which followed the Tōhoku earthquake in Japan led to total payments by Japanese insurers of more than US$13.7 billion under residential insurance policies which covered tsunami risk, and more than US$7 billion under commercial policies, much of it related to business interruption losses, according to the General Insurance Association of Japan.

With various exposures across large international portfolios of risk, one might assume that regulators demand that carriers allocate capital to support potential volcanic tsunami losses. However, they do not do so explicitly for this kind of tail risk. We know of no capital requirements for volcanic tsunami risks imposed by any of the world’s insurance regulators, nor is a volcanic tsunami stress-test or realistic disaster scenario incorporated into the EU’s Solvency II regime or any solvency regulation in the APAC region. Further, to our knowledge no vendor model is available to assess the risk.

Re/insurers must therefore adopt their own approach to managing the risk of volcanic tsunamis and other unmodelled low-frequency, high severity events. Canopius has prepared for possible events by ensuring a focus is maintained on tail-value risks in general, considering such events during portfolio analysis, and adopting a scenario approach, against which high-risk areas identified within our risk portfolio are tested. Given the significant loss potential arising from volcanic tsunamis, it is a risk we should all consider. 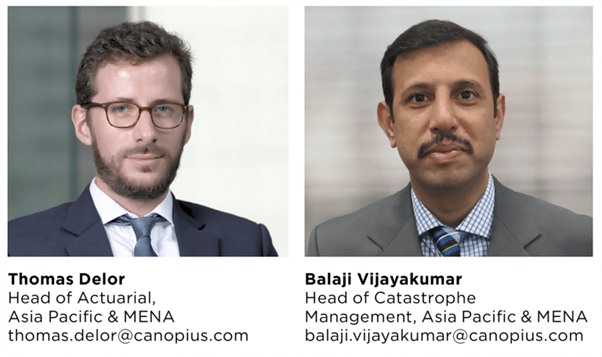 Manage Cookie Consent
To provide the best experiences, we use technologies like cookies to store and/or access device information. Consenting to these technologies will allow us to process data such as browsing behaviour or unique IDs on this site. Not consenting, or withdrawing consent, may adversely affect certain features and functions.
Manage options Manage services Manage vendors Read more about these purposes
View preferences
{title} {title} {title}